When someone says “I’m not creative,” I feel certain that in her past, probably when she was a kid, someone took a dismissive glance at something she drew or painted or made in shop class and laughed at it. Shame on that person for teaching her to say and think that about herself.

My mom never thought of herself as creative. She always celebrated the artistic talents she saw in other people, but when asked if she was “artsy,” she’d always shrug the idea away.

“I can’t draw a stick figure,” she’d say. Which she couldn’t.

In terms of acknowledging her own talents, Mom deeply believed in getting stuff done. Get in there, figure it out, make it happen. It never occurred to her to see any creativity in that.

My older sisters tell me in the years before I was born, Mom and her friends gathered every November to hand-make ornaments to sell at the Methodist Church’s Christmas bazaar. Back in the day, this involved little more than affixing sequins one by one to a Styrofoam orb by jabbing a straight pin through each sequin’s tiny center hole.

This was Mom’s first known commitment to handicraft, at least the first one known to my sisters and me. For years her thing was making Christmas ornaments.

Particularly when it’s a group activity, crafting begets crafting. My guess is that somewhere along the way, rather than tease her about the simplicity of the art form, someone instead noticed Mom’s fastidious nature and her dedication to finishing what she started. This someone probably said something like, “Hey, Carol. You’re really good at that. I bet you’d be great at making afghans.”

Enthralled by this idea, she bought the materials and notions and practiced until perfect. Shortly thereafter, Dad got a promotion and the family followed his career to a new home out of state. Mom never made another Styrofoam ornament again. Ever.

Back in the 1970s, having an afghan blanket or throw was practically universal. I’m fairly certain that as we speak, your grandma has a kooky-colored afghan draped across her rocking chair or her lap. What do you do when you need an extra blanket? You know to go to the bureau in the spare bedroom and two drawers down you’ll find the afghan made by your Great Aunt Betty. It was – and still is — the perfect accompaniment to a chilly winter’s night, watching a scary movie, or cuddling on the couch. It’s no wonder that today, afghans are making a comeback. Did they ever really leave?

By the way, I looked it up and here’s what Wikipedia has to say about the origins of the afghan: “The word afghan refers to the people of Afghanistan. The use of afghan in the English language goes back to 1831, and the first mention of the word referring to the woven rug was in 1877.”

The afghan blankets my Mom learned to make employed a technique that was more like needlepoint or rug hooking than crochet or knitting. She began with a blank canvas of monk’s cloth, which has a loose weave. Using a plastic needle, she wove the yarn through the cloth, counting stitches up, down, through and straight. Eventually, individual stitches formed mathematically perfect rows of varying diamond, checkerboard and “tree” patterns that filled the entirety of the fabric.

Once she mastered the technique, she asked everybody for their favorite colors and slowly, steadily, she made afghan throws for everyone. My sisters, her sisters, close friends, an extra tall one for Dad, and me. All told, she wove out of nothing literally hundreds of little trees, thousands of little diamonds, and tens of thousands of little checkerboard patterns. For years her thing was afghans. And then she was done. Mom never made another afghan again. Ever.

Mom’s afghan period was soon replaced by her cross-stitching period. She started small until she figured out how to make the back as neat as the front. Then she asked for everybody’s favorite past-time (music, painting, golf, whatever) and one by one, she spent months stitching precise little masterpieces.

If brevity is the soul of wit, learning may be the soul of creativity. Falling in love with the process; loving the journey as much as achieving the end result. Maybe it’s time to redefine “creative” as the art of getting better at something.

For years Mom’s thing was cross-stitching. And then she was done. She never cross-stitched anything ever again. Ever.

In her post-crafting years, Mom downplayed the sheer volume of hand-crafting she did throughout her life. “It was something that passed the time,” she’d say, but I remember it differently. I remember — each night after the dinner dishes were done – Mom sitting in her comfy chair, bringing a kind of steady certainty to the end of our family’s hectic days. It wasn’t just calming for her; it was reassuring for us.

Research seems to validate my peaceful memories. According to a recent study, “creativity in and of itself is important for remaining healthy, remaining connected to yourself and connected to the world,” according to Christianne Strang, professor of neuroscience at the University of Alabama Birmingham and former president of the American Art Therapy Association. The study found several benefits from the practice of art, including:

I believe creativity is as much a process (in my head) as a state of being (in my soul). For me, the creative process (head) begins with what I know and nudges me open so I can learn. What I experience more divinely (soul) is like a swirl of tiny miracles which transport me from a state of nothingness to a state of somethingness.

In my heart, the dedication it takes to handmake Christmas ornaments, weave afghans and cross-stitch comes from the same place as writing a great novel, photographing beautiful vistas, and painting or sculpting a masterpiece. In Mom’s case, this dedication was certainly an expression of creativity, but more so, it was her creative way to say I love you.

A final thought: great art increases in value. To me, that kooky afghan and cross-stitch and all of Mom’s creations are absolutely priceless now that she’s gone.

What’s in your closet or dresser or bureau, waiting to keep you warm and remind you of someone who was dedicated to the expression of creativity and love? Comment below or tag us @mysociability on Facebook or Instagram. 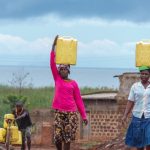