Hi! I’m Tracey, and I live to travel. No, really, I mean it. I’ve been to 43 states and 33 countries and I’m just getting started. When Tony and Amy asked me to share some of my travel experiences and photos with you, I was thrilled! Since this is the first issue of Sociability in 2021, I’ll begin with a New Years’ tradition I started years ago.

Each January 1st, I take a drive in the country and think about my goals for the coming year. In 2018, my goal surprised even me. Of all the places I’ve been, I have always traveled with family or friends, never alone. As a single woman, the thought of traveling by myself was too scary to really consider seriously. But three years ago, I decided it was time.

I’ve loved to travel ever since I was a child and my mother started taking my brother and me all over the world on exciting adventures. She was never afraid of a challenge and looked at life with a “You’ve only got one shot at this, kid, so you better make the most of it!” mentality. I inherited her intrepid outlook, so after my kids were older, I decided to make that mentality a reality. My mother passed away in late 2016, and I could feel her spirit encouraging me to be audacious and take the plunge.

Istanbul had been on my bucket list forever, but few friends shared this dream destination with me. Europe: of course! The Caribbean: absolutely! But Istanbul was literally a bridge too far for most people. I’m not going to lie, I had my concerns as well; the thought of traveling alone as a woman in a conservative, Muslim-majority country was a bit intimidating. However, after talking to two Turkish colleagues and a friend who had visited with her young family, their assurances put my mind at ease and I started making my arrangements, keeping my nerves in check as the date approached.

On the way to Istanbul, I made a quick stopover in Santorini, Greece, where I met my brother and his family to scatter our mother’s ashes in her favorite place. Traveling this first leg with my mom’s ashes gave me an added sense of purpose. I might be alone in Turkey, but it was a reminder that I am never truly alone. I could feel her in my heart and hear her whispering in my ear “You’ve got this, Sweetheart.”

The Topkapi Palace and Museum, the former home of Ottoman Empire sultans, is a vast complex and courtyards featuring room after room filled will exquisitely colored mosaics, fine marble inlays, and walls covered in intricate murals and woven tapestries.

“Whirling Dervishes” are practitioners of the Sufi religion. They twirl around the room in precise choreographed circles as they meditate with the goal of reaching perfection. As they spin, the right hand faces up to receive the grace from God and the left hand faces down to direct the grace to the world.

The Nuruosmaniye Mosque near the Grand Bazaar was not originally on my list of things to see, but as I turned the corner, it’s distinctive architecture immediately caught my eye. It’s the fourth largest mosque in Istanbul, a city of more than 3,000 mosques, and more are under construction all the time.

From the Suleymaniye Mosque, you can see the Asian side of Istanbul across the Bosphorus Straight. Ferries which are part of the Metro system connect the Asian section of the city with the Beyoğlu (Modern) and Fatih (Old Town) Districts. Getting around Istanbul is cheap and easy, but walking is still the best way to experience this beautiful city.

Before entering a mosque for prayers, devout Muslims perform a ritual purification process called Wudu, in which they wash their faces, hands, arms and feet. This is done so that they enter prayers with a clean mind, body and heart and they declare this intention prior to performing the Wudu.

Galata Tower as viewed from the Topkapi Palace across the Golden Horn estuary. The tower is located in the Karaköy neighborhood of the Beyoğlu district, which is full of restaurants, shopping areas and has a very active nightlife scene.

Friendly–but very competitive–games of backgammon fill the streets of Istanbul. It was intriguing to see how fast the laughing and joking got very quiet and serious. And then of course, right back to roaring laughter.

In the only city on earth that spans two continents, there are new and inviting worlds of splendor around every corner in Istanbul, and the people are among the friendliest I’ve met in all of my travels. They welcome visitors with open arms and want to make sure everyone loves it as much as they do. My pre-trip anxiety melted away the moment I arrived, and I enjoyed every minute of my adventure.

During the days, I visited museums, mosques, churches, and bazaars and was overwhelmed with the sights, sounds, and smells. The architecture and mosaics filled me with wonder, the calls to prayer for a religion not my own nevertheless caused me to still myself momentarily from the hustle and bustle of the city all around me, and the smells of the food wafting towards me as I passed the many open-air restaurants tempted me to stop and relax more than once. As I explored the city, I was fascinated by the backgammon games on virtually every corner and waiters who appeared out of thin air to deliver chai in glass teacups and saucers to people on the streets and in the parks. I still have no idea where they came from, or where they retreated to after service, but it tickled me each time I saw them scurrying about.

Cities have different personalities after sunset, so if you don’t get out in the evenings, you’re only getting half of the picture. Although I am typically not a group tour type of traveler, I arranged for activities through reputable tour agencies for interesting things to do each evening, and each one turned out to be incredibly fun. I was mesmerized by the whirling dervishes at an authentic Sufi ceremony, traipsed all over the city on a food tour where I got to share the exotic specialties of Turkish cuisine and experienced a dramatic sunset dinner cruise with live entertainment on the Bosphorus. The best part of each of these activities was meeting other travelers from around the world and sharing these experiences with them.

The most memorable conversation I had on this trip was with a Muslim grandmother from South Africa as we were traveling by bus to and from the dinner cruise. She was so incredulous that I was in Istanbul by myself. It was a joy to get to know her, although even by the end of the night, she remained unconvinced of the wisdom in traveling alone to Istanbul. Although other friends and family members also questioned my decision to go to Istanbul alone, explaining my reasoning and desire to express my independence and confidence to her felt like I was having a conversation with my mom again. I don’t know that my mother would have approved of me going alone if she had been alive, but I know that she would have been proud of me afterwards seeing that I could do it. When my own daughter went to Southeast Asia alone for two weeks the following year, I was anxious yet proud of her for doing at 28 what took me nearly twice that long to accomplish.

I’m not sure what my 2021 New Years’ goals will be yet, but I do know that I can’t wait to take my next solo trip and feel the freedom of it again. What are you going to do this year to challenge yourself? 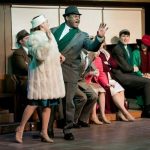 Why art should be part of adulting.
Next Article