Let’s talk about cake décor. More specifically, let’s talk about how trying to surprise my roommate TJ with a cake for his birthday taught me several lessons about the cake creation process. As it turns out, writing about cake décor is almost as difficult as the actual decorating process itself, so after three drafts I’ve compiled my “Do’s & Don’ts” into an easy to read list. Because, you know, you’ve got to break a lot of eggs to write about baking a cake.

The last and most important DO: Enjoy the cake with your friends and loved ones. Even if it’s ugly as all get out, it’ll likely still taste pretty good.

Also, keep practicing the cake décor! It’ll take at least 5 tries before things start to look more “Keep Austin Weird”-esque instead of “Oh God, she has no idea what she’s doing and I really wish she’d stop.”

Fortunately, no one will complain about having extra cake to eat.

Book Review: “10% Happier: How I Tamed the Voice in My Head, Reduced Stress Without Losing My Edge, and Found Self-Help that Actually Works—A True Story” by Dan Harris
Next Article 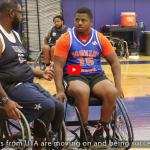