After decades of covering Arlington, Texas as a reporter for the Arlington Citizen-Journal and Fort Worth Star-Telegram, I believed I was as knowledgeable as anyone about the city where I had lived since 1965. I knew what the big issues were, how to find information, and who was a good source. Being married to former Arlington Star-Telegram publisher and Arlington historian/author O.K. Carter certainly added to my data base of community knowledge.

It was knowledge without action though. It had to be. As a journalist and University of Texas at Arlington news director, I had to be non-partisan. My work was full-time and then some, so there was no time for many organizations in my life, especially a politically-oriented one.

The all-women political action committee organized in 2004 by then councilwoman Sheri Capehart was comprised of women I knew, plus friends and neighbors who were active in the community as volunteers and non-profit board members. I had served on boards with many of them.

One does not just join MPAC; there is a screening process. After all those years of avoiding public political stances, my husband though I should consider joining when I retired in 2010. As I leaned into my new world without deadlines, budgets, bosses, or staffs, I took a closer look, periodically nudged by O.K.

I approached membership with trepidation. After all, MPAC had accomplished some impressive things–from successfully advocating for the 550-ton Caelum Moor environmental sculptures to be taken out of storage and moved to a prominent place to pushing for tree ordinances and a new animal shelter.

Most intimidating were the breakfasts they hosted for mayoral and council candidates at which they questioned each regarding issues members had determined were important to Arlington.

What could I offer?

It turned out my experience with design and printers was needed to develop an MPAC brochure and my social media dabbling helped the group set up its Facebook page.

On the other hand, many members one-upped me by having served on the city’s planning and zoning commission, had deep knowledge of its master plan and the organization was peppered with attorneys, IT wizards, and neighborhood advocates.

And that was when I realized MPAC was about sharing talents and members learning from each other. I knew words, brochures, and Facebook. They knew everything else. Best of all, they came together for a common cause–making Arlington a better place to live, work and play.

The first of its issues I was involved in was a thorny one that came with vocal proponents and opponents—persuading Arlington City Council to adopt a comprehensive smoking ordinance that would ban smoking from bars, billiard halls, sexually-oriented businesses, bowling centers, and other private work places. This was a big step further than the City’s1985 ordinance that prohibits smoking in most public places and places of employment, such as restaurants, retail shops, schools, and hospitals.

The process was arduous but through it I discovered how tenacious, patient, knowledgeable and strong our members were. We often attended afternoon city council work sessions that ran into evening council meetings, making it a six or more hour endeavor.

We met with individual councilmembers and the mayor, some more than once, armed with statistics from the American Heart Association and American Cancer Society, and cardiologists. We spoke during the periods set aside for public comments at council meetings.

The night the ordinance passed was a time for members to celebrate and take a breath.

One of the benefits of MPAC membership has been not just meeting new women who would become friends but frankly getting to know those who are my neighbors, like Shelia Gibson. Carole Hoyer, and Jerry Tees.

The unofficial mayor of East Arlington, as I call her, Sue Phillips, has been an acquaintance for decades, but thanks to MPAC is now a confidante.

Best of all, Debbie Borek, who I met when she worked at the Citizen-Journal in the 70s and who lives near me, has become a close friend. It took MPAC to bridge the nearly 30 year gap.

There is no organization in town like MPAC, Arlington, Inc. (its official name that stands for Political Action Committee and no, the M doesn’t stand for anything but says it all when leading the other letters).

I like being a member of a group whose members have their hearts and minds in the right place. I like that it is all women, advocating for good things and having leverage to get them done.

You might say MPAC has indeed had an impact on me. 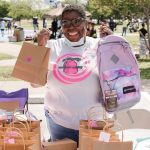