Friendship is constant in all other things.”
– Much Ado About Nothing by William Shakespeare

Increasingly these days, we find ourselves pulled into conversations about what in the world “other people” are thinking. Is this happening to you, too? In a world struggling to steady itself against a pandemic and a country preoccupied with the opinions of outliers, it’s no wonder that these isolating times have fueled the all-too-human tendency to be on alert when it comes to strangers.

What’s a lifestyle magazine got to do with it? Probably not much, except to say that we’ve become very interested in the idea of friendship, particularly unlikely friendships. How DO people overcome significant differences to develop meaningful long-term relationships?

Let’s start with one of our most favorite unlikely friendships in recent memory: Snoop Dogg and Martha Stewart. According to marthastewart.com:

Believe it or not, Martha and Snoop’s friendship emerged out of a bowl of mashed potatoes: Martha first invited Snoop onto The Martha Stewart Show back in 2008, and the two connected over a creamy bowl of spuds and a few vocabulary words that Martha had yet to learn (i.e. “foshizzle”). “What a weird couple we were,” Martha says, recounting the story for NBC’s Harry Smith. “Martha kind of, like, pioneered this,” Snoop told Smith, “as far as letting rappers become a part of daytime television.”

The two ended up being distant admirers of each other until the pair reconnected at a Comedy Central roast of Justin Bieber in 2015.

“She sat next to me, and she stole the show,” Snoop tells NBC. “She was the funniest ‘roaster’ that night. In that moment, I knew I wanted to be alongside this lady for the rest of my life.” It didn’t take too long for Martha and Snoop to get started on what would become Potluck Dinner Party. “I originally said, ‘If Snoop will do it, I’ll do it,'” Martha said. Potluck Dinner Party ended up being one of the most well-received shows on VH1 in 2016…

“I like his laid-back energy-I like his outspokenness, I like his sense of timing, and I really enjoy to watch him cook,” Martha said. “He’s so particular, his little tiny bits of this and that, and it all finally comes together.” As for Snoop? Martha seems to be more than just a good friend. “I love Martha – like, I love her for real,” he said. “She’s the big sister I never had. Being able to correct me, to teach me, to show me how to be better, to give me something to aspire to be.”

This story, as well as this article from Psychology Today, inspired us to come up with our own unscientific list of qualities shared by great friends:

A note for the times we live in: shared beliefs about sex, politics, and religion didn’t even come close to making our list.

Speaking of religion, the Bible is full of interesting stories about human relationships, including friendships. According to Alikay Wood, editor of Guideposts, one of the most famous friendships of the Bible almost didn’t happen.

David and Jonathan were supposed to be enemies. Jonathan was the son of King Saul, the very monarch David was appointed by God to replace. King Saul wanted to kill David. But Jonathan befriended him and risked his own life to warn David of his father’s plans. 1 Samuel 18 says that Jonathan loved David “as his own soul.” When Jonathan was slain in battle, David even composed “The Song of the Bow” and instructed all the children of Israel to learn it.

It’s tough to talk about friendship without talking about love, and since Valentine’s Day is coming up, love is in the air. The ancient Greeks, particularly Plato and Aristotle, were early students of love’s complexities and developed several words to distinguish between the different types of love. Agape [“aga-pay”] is commonly understood as a “universal love,” which encompasses unselfish concern for the welfare of others. Agape love may drive the beginnings of friendship, but we think the ancient Greek’s Philia does a better job describing the goodwill shared between longtime friends. From writer Jenna Birch:

Philia is characterized by intimacy, knowing, and soul-to-soul bonds. It’s encouraging, kind, and authentic; the stuff from which great friendship is made, regardless of whether it’s with a platonic best friend or a romantic partner. This love is also based on wanting what’s best for the other person. Philia is a connection akin to that of soul mates; it’s one part destiny, another part choice.

Horatio and Hamlet. Mark Twain and Nikola Tesla. Leslie Knope and Ann Perkins. Oprah and Gayle. While they could have easily landed in enemy or (worse yet?) frenemy territory, instead they built their relationships on what was best for the other person. Peace, we humbly submit, is the result of goodwill toward men, not the other way around.

Throughout our February issue, our talented contributors are joining us in saluting different kinds of friendship. Tracey celebrates the joy of traveling with her daughters while Beth reflects on 17 years of “intentional entrepreneurship” with her business partner and friend Reecanne Joeckel. Kendall shares the origins of Galentine’s Day and some of her own special friendships, plus tips for perfecting homemade macarons. For a memorable Valentine’s Day or any night out on “A” Town, Autumn offers up unique ideas and destinations. Speaking of memorable destinations, this month we’ve invited Downtown Arlington to a takeover of our InstaGratitude section, which was lovingly curated by Elena Thaxton. To thank her, we’re following Lindsay’s step-by-step instructions for making adorable pop-up cards. You grow, girl.

The Bible’s Most Famous Friendships by Alikay Wood, Guideposts.com, January 2018

How to Sit: Finding Magic in Your Own Backyard
Next Article 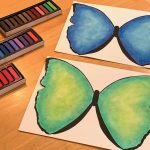